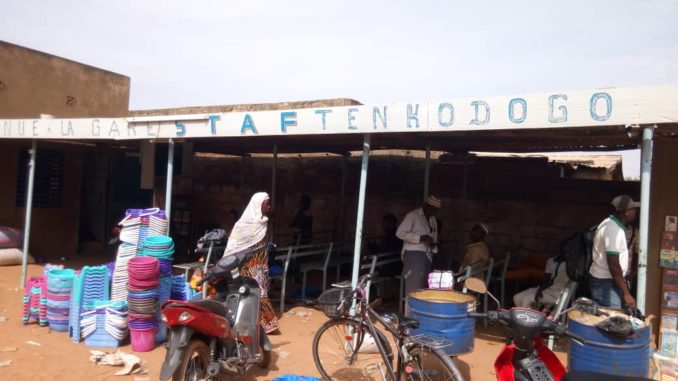 As I wrote to you in the last issue of Communication, I stayed from Friday May 10 to Tuesday May 14 in Burkina with two Marianist sisters, Sisters Tatiana Laougnamassi and Gisèle Agniba as part of the celebration of Good Shepherd Sunday and we were in the diocese of Tenkodogo which borders with Togo. By accompanying the Marianist sisters, my goal was above all to visit the Immaculate Conception parish of Ouargaye that Monsignor Prosper KONTIEBO would like to entrust to the Marianist brothers in Togo. The bishop, learning that I had come, interrupted his stay in Ouagadougou to return to meet me in Tenkodogo. I had the opportunity to get to know him and chat with him. I also met his collaborators and made the planned visit. Here is a brief account of this trip.

An anecdote to begin

The chancellor of the bishop told me that during his stay last December in Kara, he went to Chaminade High School. He meets a student who lives in boarding school. He begins a discussion with him to gather his impressions on our establishment. Finally, he invites her to come and live in Burkina. To which the student replies that he would never want to live in this desert country where people are starving … This is an idea that we can have of the country of upright men (translation of the name of the country). The reality is quite different. For example, Togo imported more than 295,000 tonnes of rice in 2018, while in the same year the ginning plant of the diocese of Tenkodogo alone produced 7 tonnes of rice per hour; which was enough for the million inhabitants which it counts… ..; factories like the one I’m talking about, there are all over the country.

With the current insecurity in Burkina due to the frequent jihadist attacks, we hesitated to set off on this trip…. Finally, I launched myself with the sisters…. Like the Virgin Mary who, while being aware of the risks of the trip, went in haste to visit her cousin Elisabeth. Our travel plan: departure Friday at 3 p.m .; overnight in Dapaon; the next day at 5 am mass and departure for the border at Cinkasse; crossing the entaxi-motorcycle border at 6.30 am and continuing the journey to Tenkodogo. We took the risk of this trip, with a few precautions anyway: avoid showing ourselves as priest and nun; for this we dressed as people do, without external signs. From the border, we traveled by coach to blend in with the mass of travelers. We took three hours to cover the 100 km separating the border from Tenkodogo although the road is brand new and well paved. Reason: 5 times, the bus stopped, the travelers got out, got in line to each present their identity card to a police officer. Two other heavily armed and alert officers carefully inspect the vehicle. In the coach, I chat with a nice gentleman. He shows us where Father Salesian Caesar and 7 soldiers were assassinated last February. Their bullet-riddled cars are still on the scene. We finally arrive at our destination at 9:30 am. The priests of the cathedral, led by the priest and the priest in charge of vocations welcome us with open arms. It’s the reunion with the Marianist sisters who are coming for the umpteenth time. I introduce myself. After the glass of water and the news, they show us our rooms. We are told that Monsignor is waiting for us at 11 am at the bishopric. 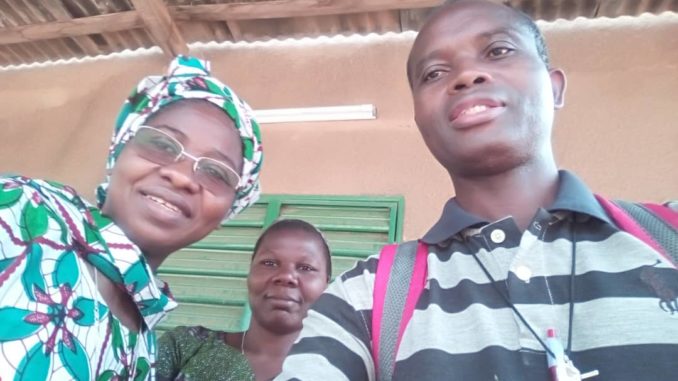 We met Monsignor three times. The first takes place on the Saturday of our arrival at 11 a.m. At 10:30 am, a car came to a stop in the cathedral courtyard: the bishop sent the father executive secretary of OCADES (which corresponds to Togo to Caritas) to pick us up. After 6 km by car, we are in front of a large fence and two beautiful new houses. It is the bishopric and the residence of the bishop. He welcomes us cheerfully. He is Camilian, must be around sixty. With a radiant face. The discussions are very cordial. He is the first bishop of the diocese who is only 7 years old. Thirty priests collaborate with him. Five religious congregations established in the diocese help them in pastoral work; Camillians have been present since time immemorial. The episcopal city has only one parish, where we are housed. The diocese has many social projects. He is looking for congregations to accompany him. The bishop reiterates what he expects from the Marianist sisters and what they ask of the Marianist brothers in Togo. He is aware that the Marianist brothers in Côte d’Ivoire are making visits to Burkina to present Marianist religious life. He explains that once we are present, he will allow us the freedom to deploy our charisma also in other areas than what he currently thinks. We continue the discussion at his table. Things are becoming clearer in my head about what Monsignor expects from us. The Bishop himself escorted us by making a detour to a girls’ high school run by the sisters of the Immaculate Conception (S.I.C) of Ouagadougou; they have 700 daughters including 300 interns. A talk with a SIC nun who welcomes us: we understand that the establishment works well and has excellent results, like Chaminade High School in Kara. The second meeting is held in the afternoon of Sunday. Again, Monsignor sends a car to pick us up. We are still discussing the projects he has for us. Again, he invites us to his table for supper. A third meeting with Monseigneur takes place around 1 p.m. Monday following our visit to the site of the rice shelling project developed by the diocese. Once again the bishop provides us with a free car and driver to take us 45 km from Tenkodogo to see this place. On his return, he presents his episcopal council and sisters who will soon settle in his diocese at his invitation. We share the meal with everyone; a great opportunity to know the closest collaborators of the bishop who are perfectly aware of the bishop’s intentions concerning us. Immediately after, the bishop packed his bags and set off for Ouagadougou, where the general assembly of CERAO (Regional Episcopal Conference of West Africa, RECOWA in English) is scheduled to begin that evening.

The sisters and I participated in three Good Shepherd Sunday Masses and vocations. The celebrations were lively, prayerful and uneducated. The churches were crowded; the faithful sometimes came by bicycle because of the distance, which is not seen with us on Sundays. During the celebrations, we took the floor to present the Marianist family, its spirituality and its charisma. Outside of the masses, we had to meet the vocandi of the cathedral parish of Saint François-Xavier who were gathered for a weekend of meeting and training. Many have shown that they are interested in who we are and what we do. We promised to return for the vocation camp in July-August 2019, which this time will bring together vocandi from across the diocese on three sites. 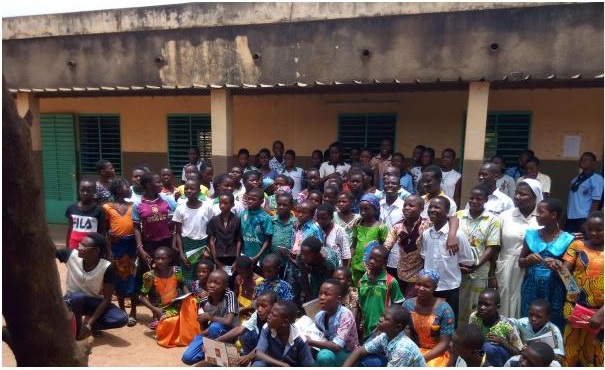 I mention here some reasons which in my opinion can militate for an SM establishment in this diocese:

– The Burkinabè, a people of workers, both men and women – Diocese young but living by the faith of the faithful and the different projects

– Church and presbytery already exist in Ouargaye The bishop told us that he has a special devotion to Saint Joseph. Let us also entrust our discernment.